Consuegra is a beautiful historic town set alongside a range of low mountains. Twelve windmills can be found on the top of the Cerro Calderico ridge, along with a beautiful 12th-period castle. Fans of the Spanish writer, Cervantes, will instantly recognize these windmills, which were prominently featured as the 'giants' in the 'Don Quixote' novel. Stand proudly atop the ridge, with their white cylindrical towers and blue, pointed roofs. According to local tradition, the windmills, used primarily to grind grain, were passed from father to son for many generations before being 'retired' in the 1980's. The Windmills have since been lovingly restored.

As you explore the different mills and look around, you'll witness a spectacular view of the many vineyards all around.  You can enjoy refreshing drinks from one of the mills transformed into a restaurant.

Two of the windmills were open to walk in. The first one is more of a souvenir shop, and you can pay 1.50 euro to go up and get a higher view of the windmill. (You can only look out the tiny windows).  The open second windmill, however, offers refreshments, and you can also go up in the windmill and sit down and have some hot chocolate or coffee. The stairs in both of these windmills are quite small; therefore, if going with little children, you need to watch them. There is a rope along the wall to hold on. Walking along the path and looking around it is stroller and wheelchair friendly, but not going into the windmills. These are tiny quarters.  The windmills themselves you could spend an hour or so on, but combining it with the castle, I would suggest leaving yourself about 3 hours. 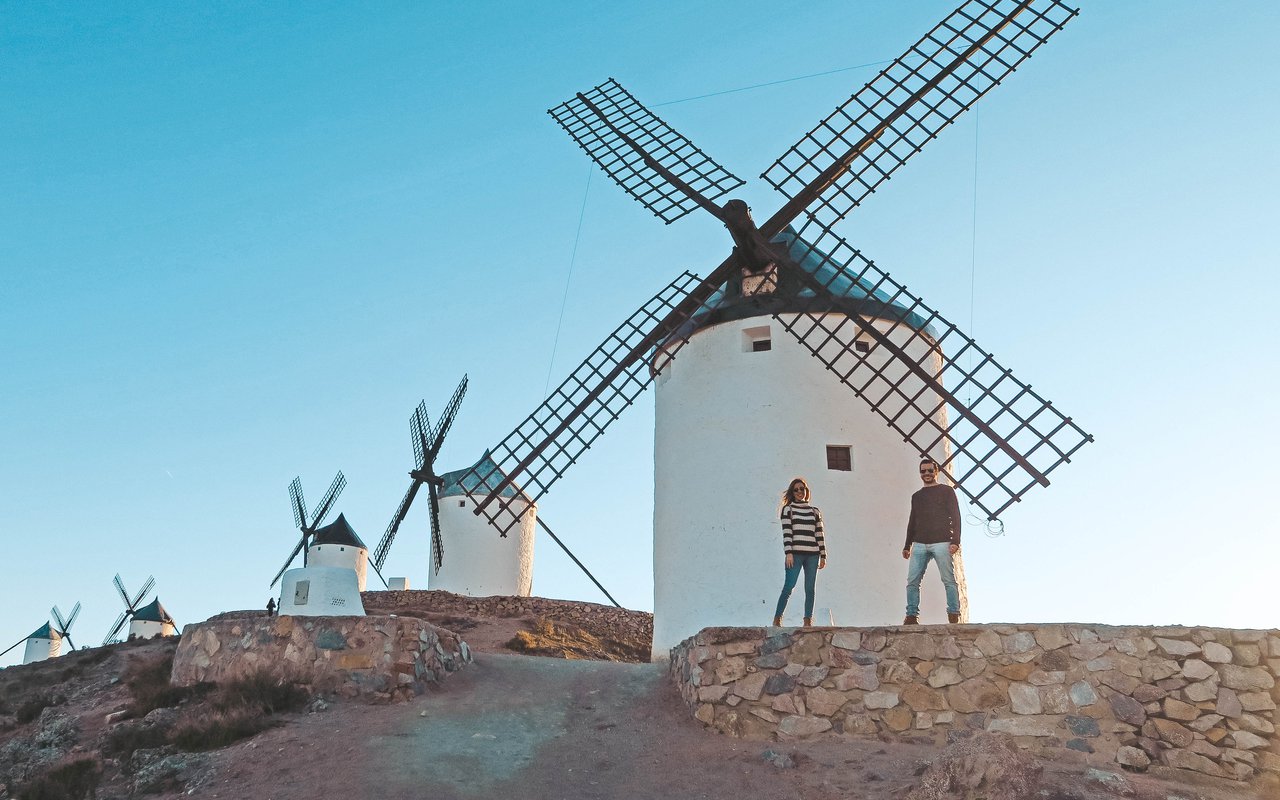 Lodge Nearby
CLICK HERE TO GET DIRECTIONS Marker Animations

Lies in the north of Spain with a perfect view of high-altitude terraces that are surrounded by the dense Spanish greenery, and the calming Cantabrian coast, Picos de Europa National Park certainly will leave you with unforgettable memories.

Most travelers favor to walk rather than climb and there are many beautiful marked hiking trails that all offer breath-taking views. Details of all walking routes can be obtained from one of the park’s visitors or information centers. If you chose to get to this park for a hike then you must remember that you'll;l be encountering  some of the steepest slopes to be found anywhere and even simple walks often involve sections with steep hills.

The scenery is breathtaking with many spectacular walking trails. The many villages within the park holds restaurants serving local foods. Local cider is very popular. Staying in the smaller villages is like taking a step back into the past with cows walking down the tight cobbled streets. 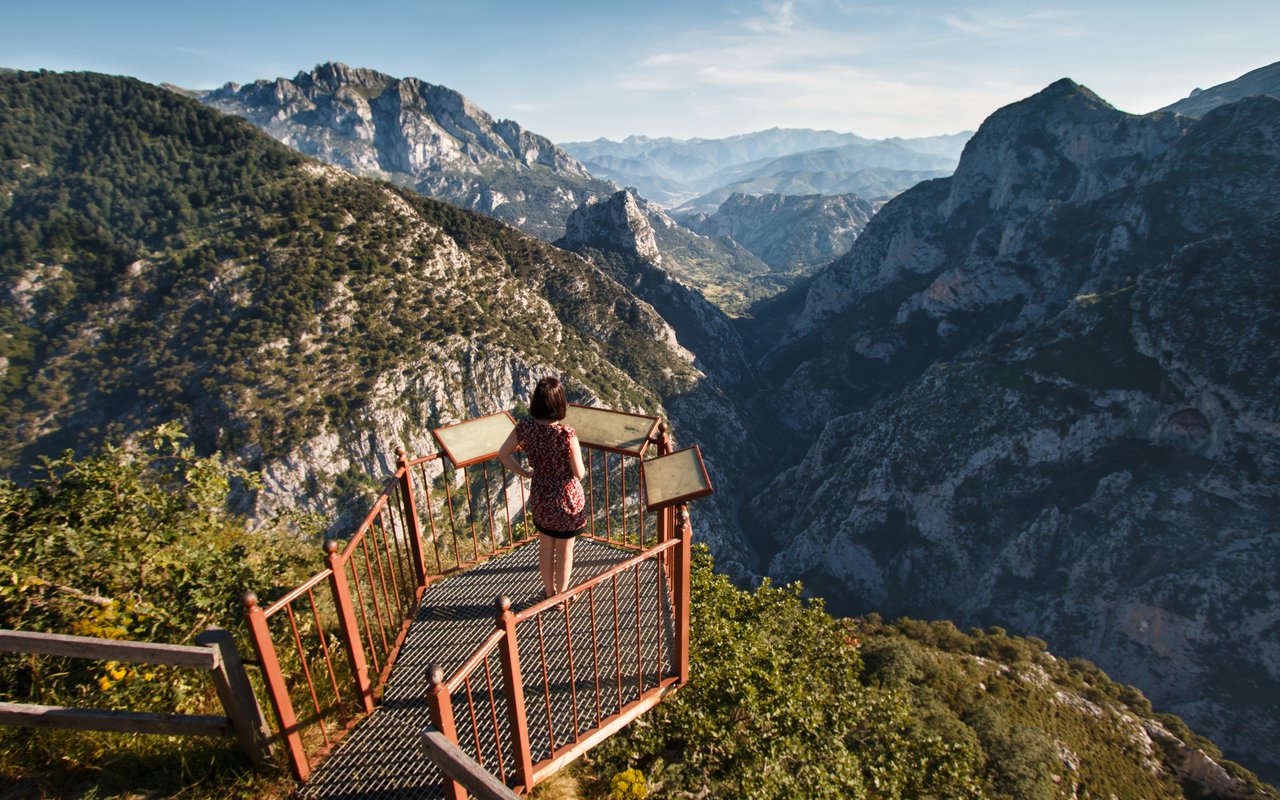 Born, raised and educated in England - with frequent visits to her father's home of Venice, Italy - at 26 years old Lucia moved to California in 2010. With her roots in the surfing, skateboarding and outdoor adventure world, Lucia focuses on lifestyle and adventure for editorial and advertising clients. Some of her clients include National Geographic, ESPN, Red Bull, Jeep, Land Rover, Roxy, and Vans, among others.

Lucia's work has been internationally recognized and awarded by National Geographic, PDN, Windland Smith Rice International Awards, Black and White photography and the Masters Cup. When not shooting, Lucia can be found surfing the Californian coastline or visiting family back home in England. Lucia splits her time between her Californian home and a family cottage in England. 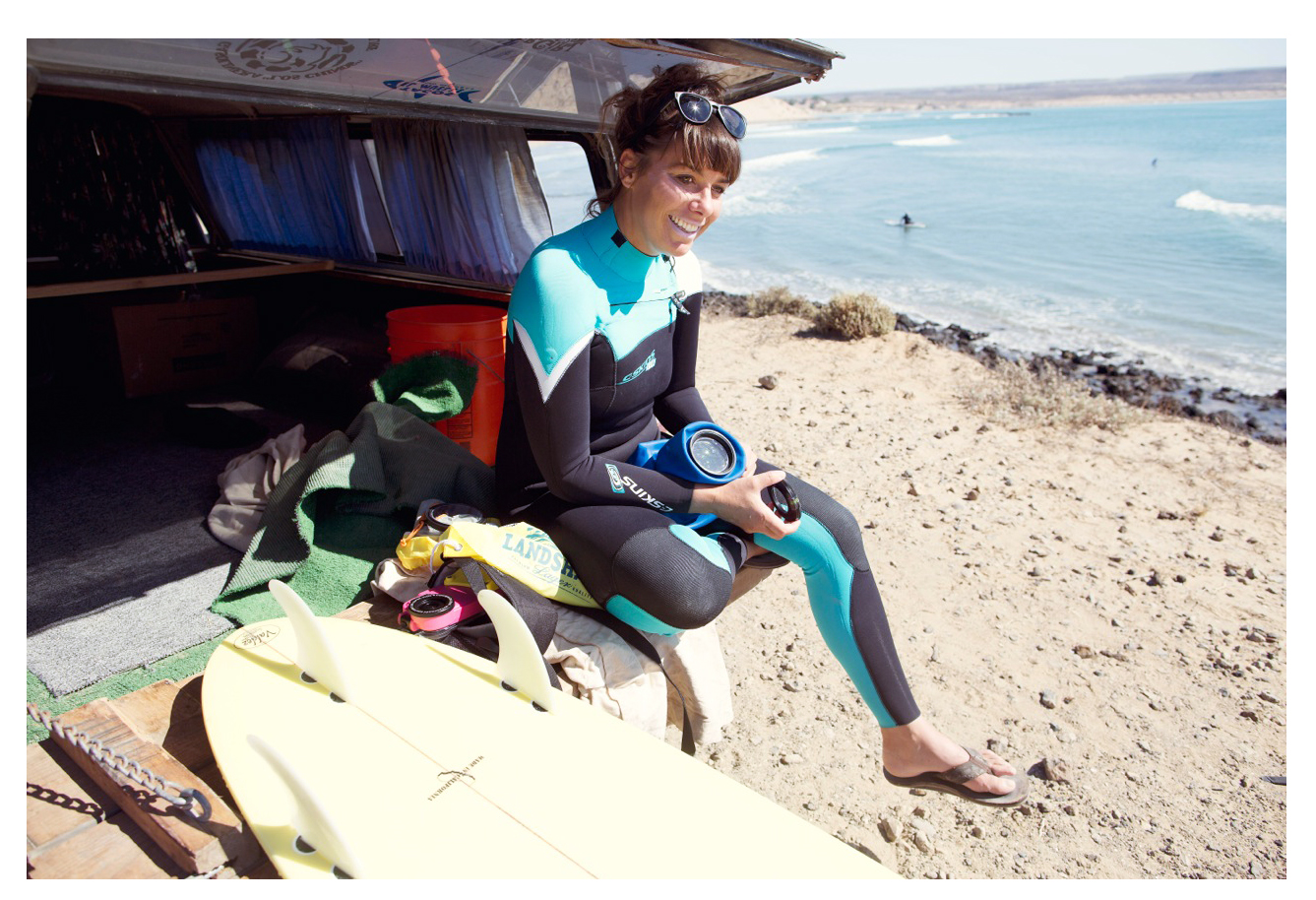 How did you originally got into photography, and specifically, surf photography?

I started using a camera when I was in college in London. It was my dads Nikon film camera, which he let me use. Soon after I moved down to the coast and started surfing which led me to start shooting. I spent the summers in Cornwall working as a surf instructor and also taking my camera out into the water to shoot with, and the winters travelling to places like Morocco and Australia. I always liked to have a camera with me and to document my travels. So this is how it started- through my love of surfing and travel!!

I’m sure a lot of our readers would like to know as a professional photographer when you’re presented with a less than ideal situation, how do you find your subjects and produce images you would be happy with?

Sometimes not everything is perfect during a shoot. A lot of times the weather changes, the sea conditions are dangerous and there can be long days on location. It’s always about making the most of it and keeping positive. There was one time when I was left out in the sea after a shoot as the boat did not come and collect me, it was getting dark and the surf was big. Keeping calm and treading water for four hours I finally got rescued. It was good I didn’t panic! 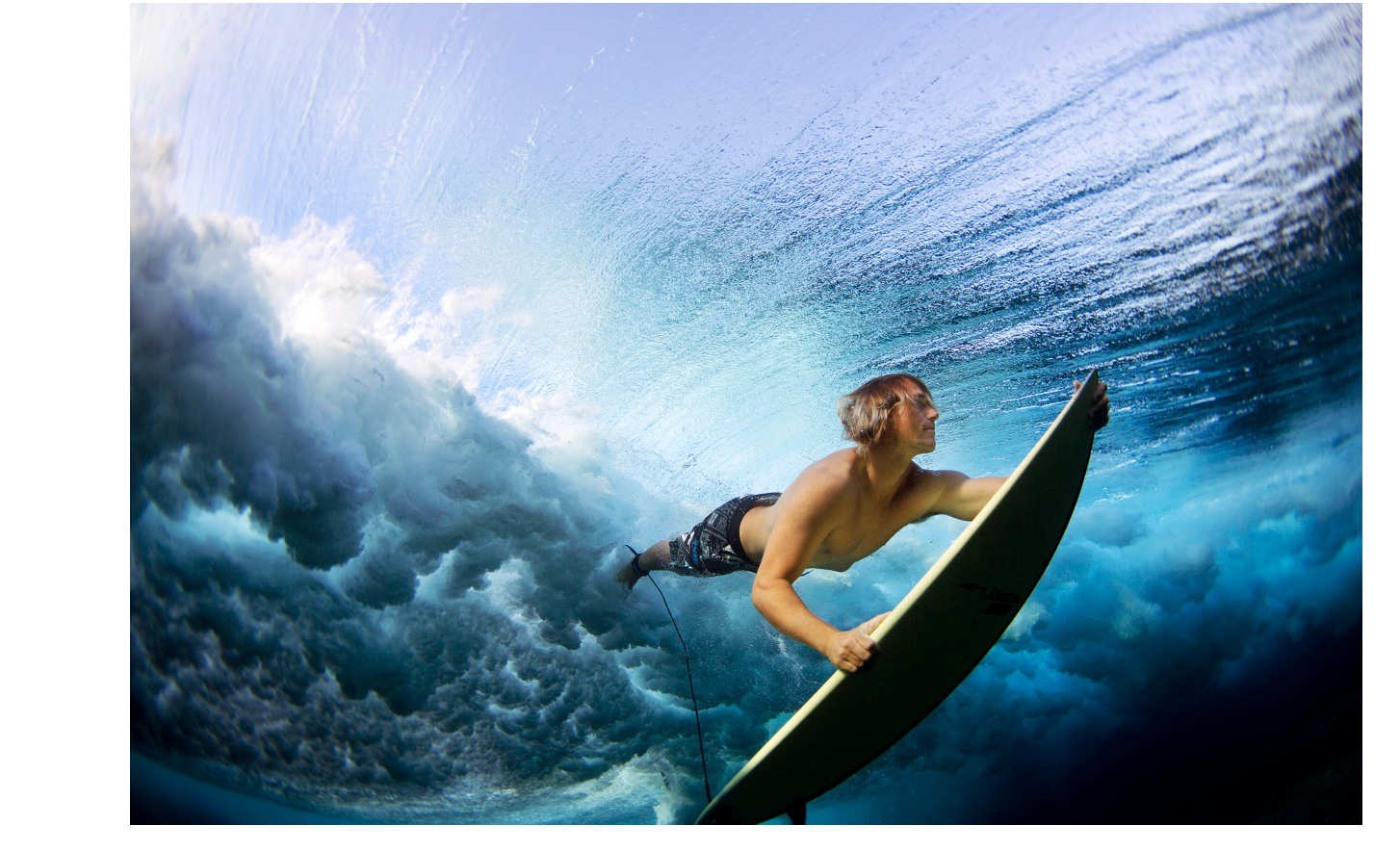 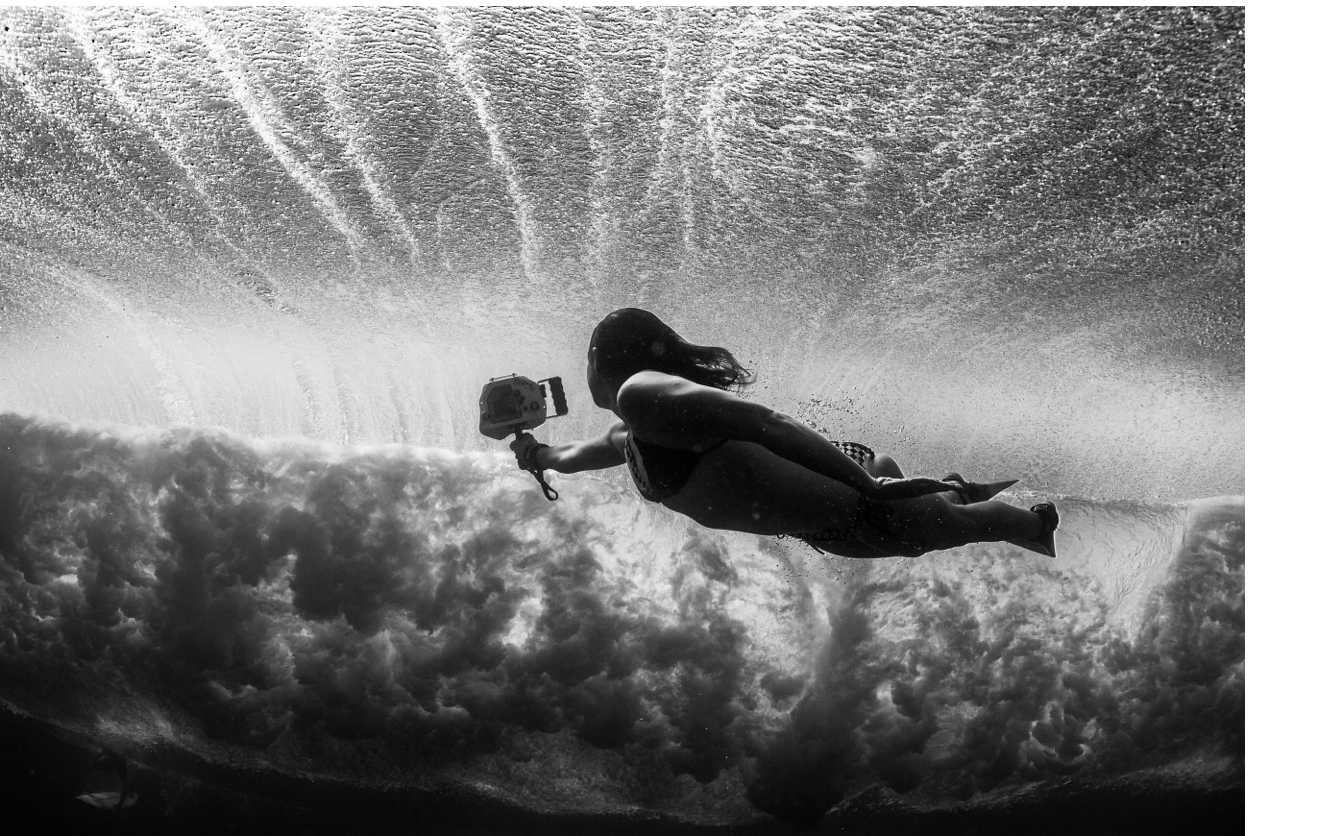 In your professional and artistic opinion, what makes a great surf photo?

I like to see sharp and clean images with loads of color and life! A photo that shows the stoke on the surfers face and the wave perfectly formed behind!! Its hard to say what is a great photo, there can be so many different styles! I like photos which make you want to be there and on the wave!

What is the most memorable trip ?

I love Fiji as the water is so clear, I did some in water shooting there and I captured a lovely image underwater of a surfer with his board. Ive never been in such clear water in my life!! It was so magical. 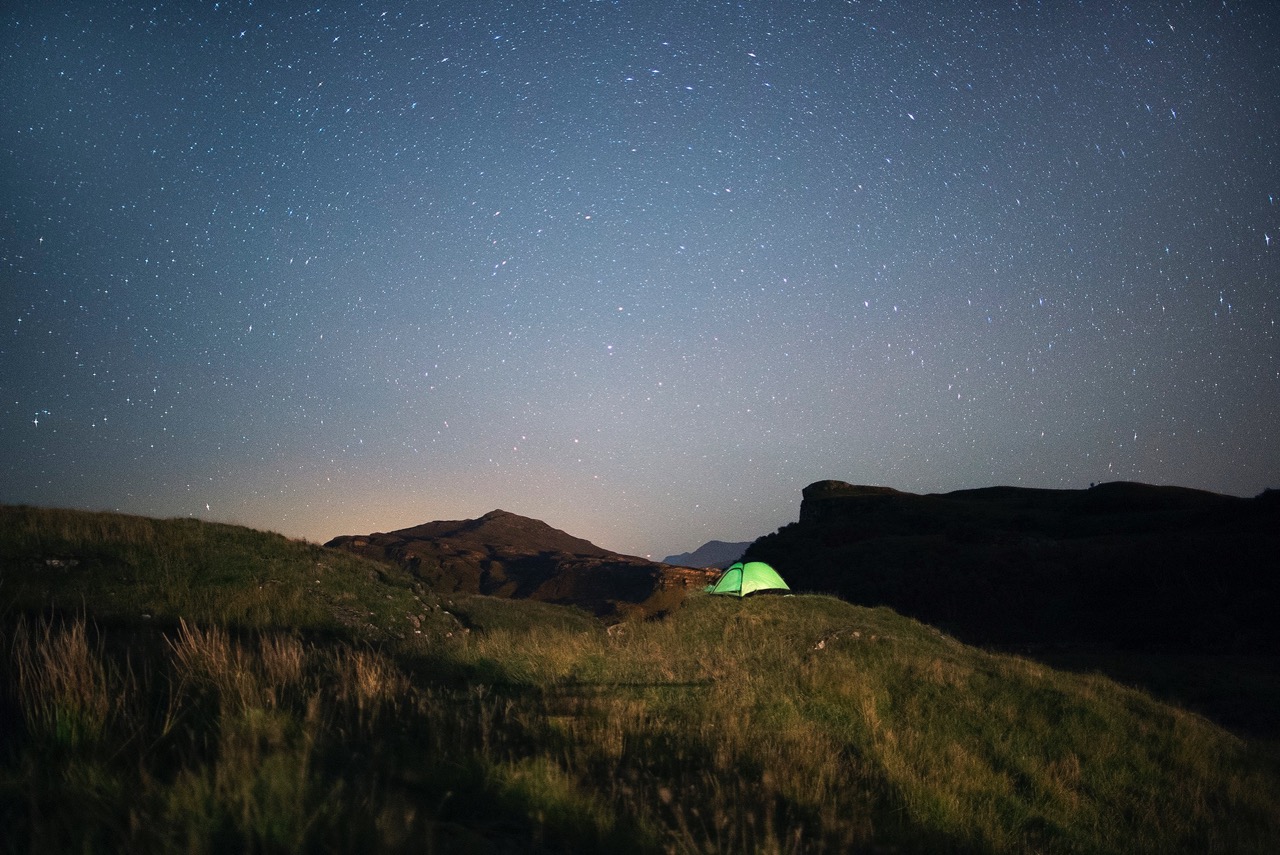 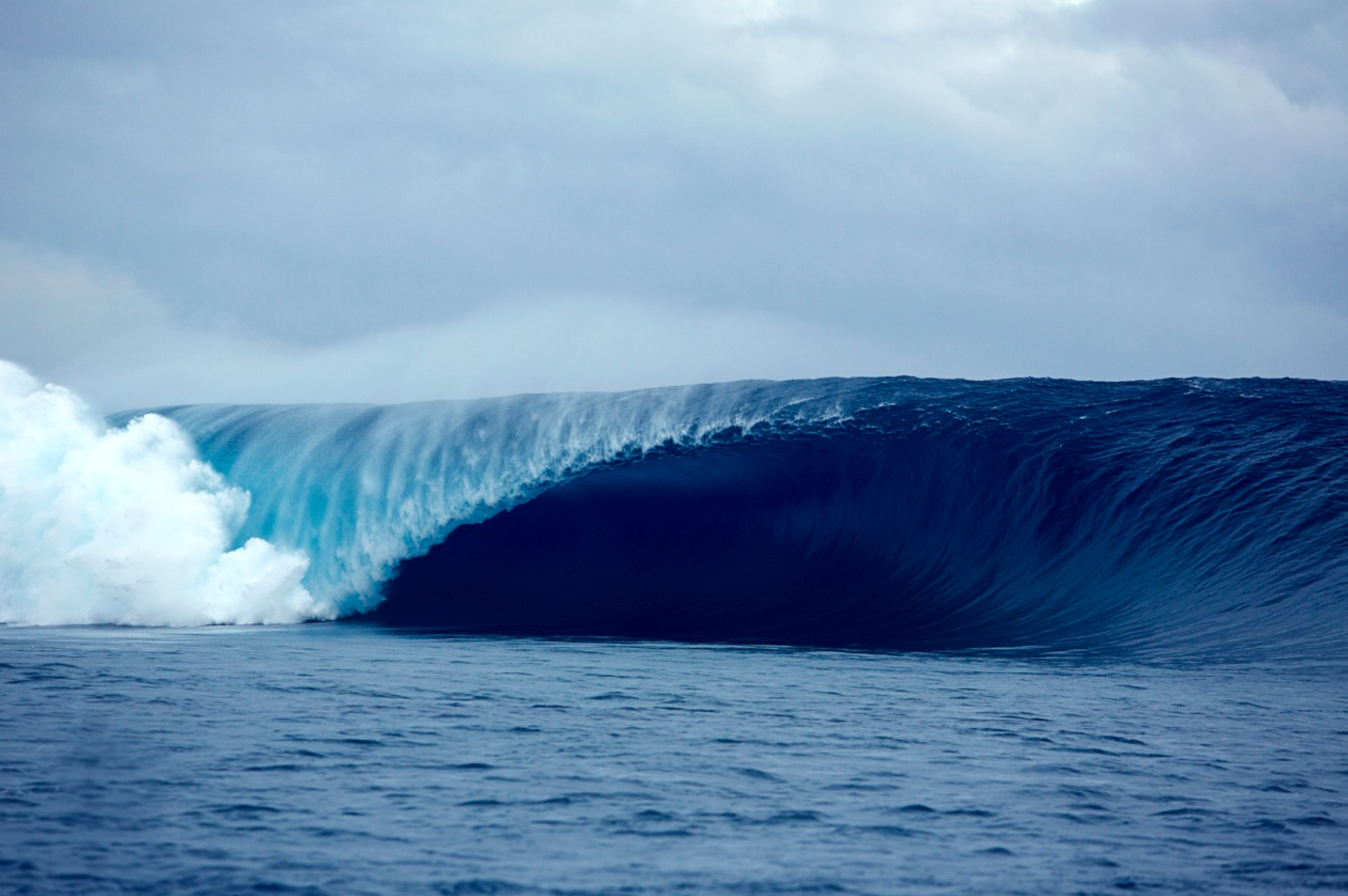 What equipment do you use to captures your footage? What are some of the challenges of using them?

Closing Thoughts … What’s the one piece of advice you’d give to someone who’s looking to get into photography, or surf photography?

Keep going and just get out there! You’ll learn from your mistakes. Be a good good swimmer and have a love for the ocean. It will make you smile and keeps you fit!!! 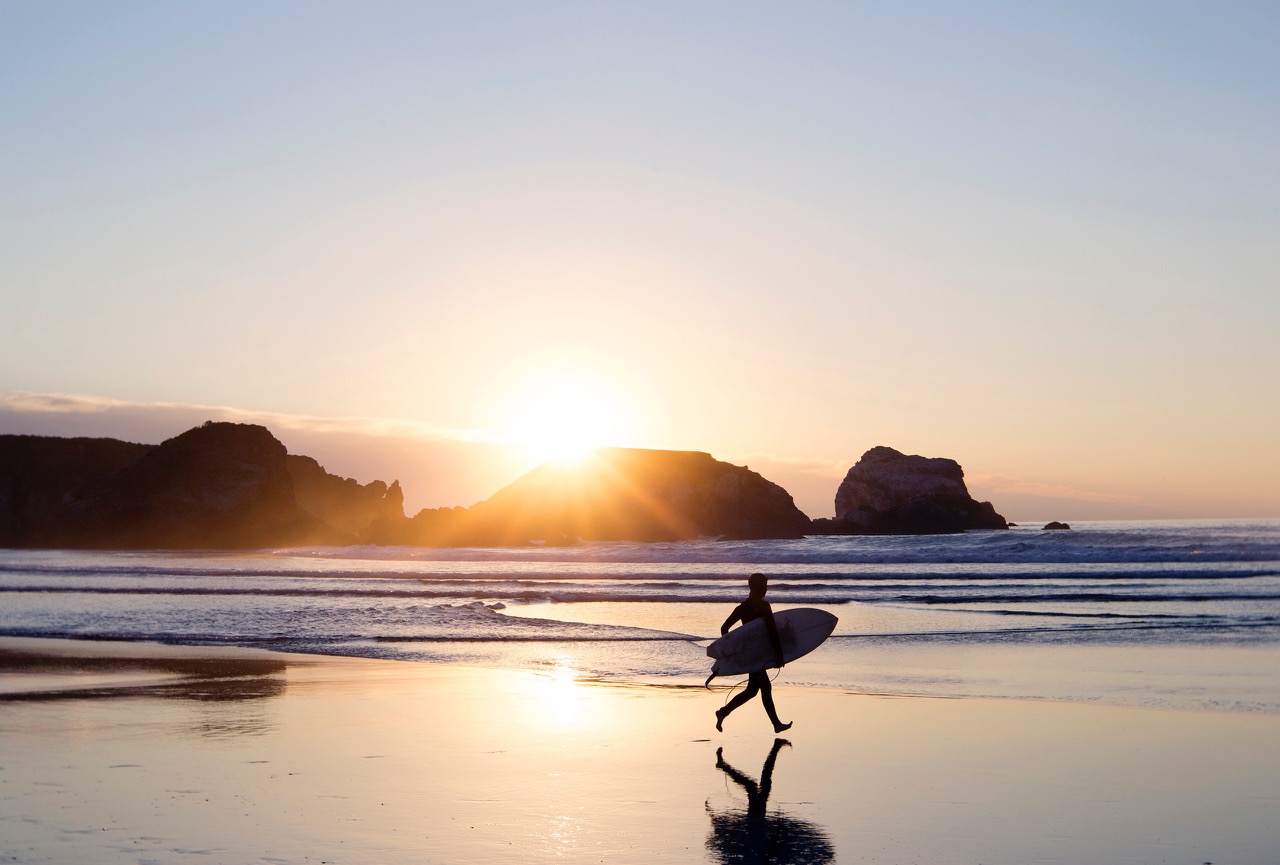 In the southwest of Europe, the Pyrenees mountains originate and form a border between Spain and France. The highest of the peaks of this mountainous range can reach up to 3400 m while a series of green stripes (lines) also arise and move outwards from Pyrenees mountain range through the French region, which are actually hill rows that are around 400 meters at their highest point. Two turquoise colored bright lakes are locates in the border side of Spain and these are the Mediano reservoir having 1714 Ha surface area and also the EI Grado reservoir while both these dams been establishes on Cinca River. 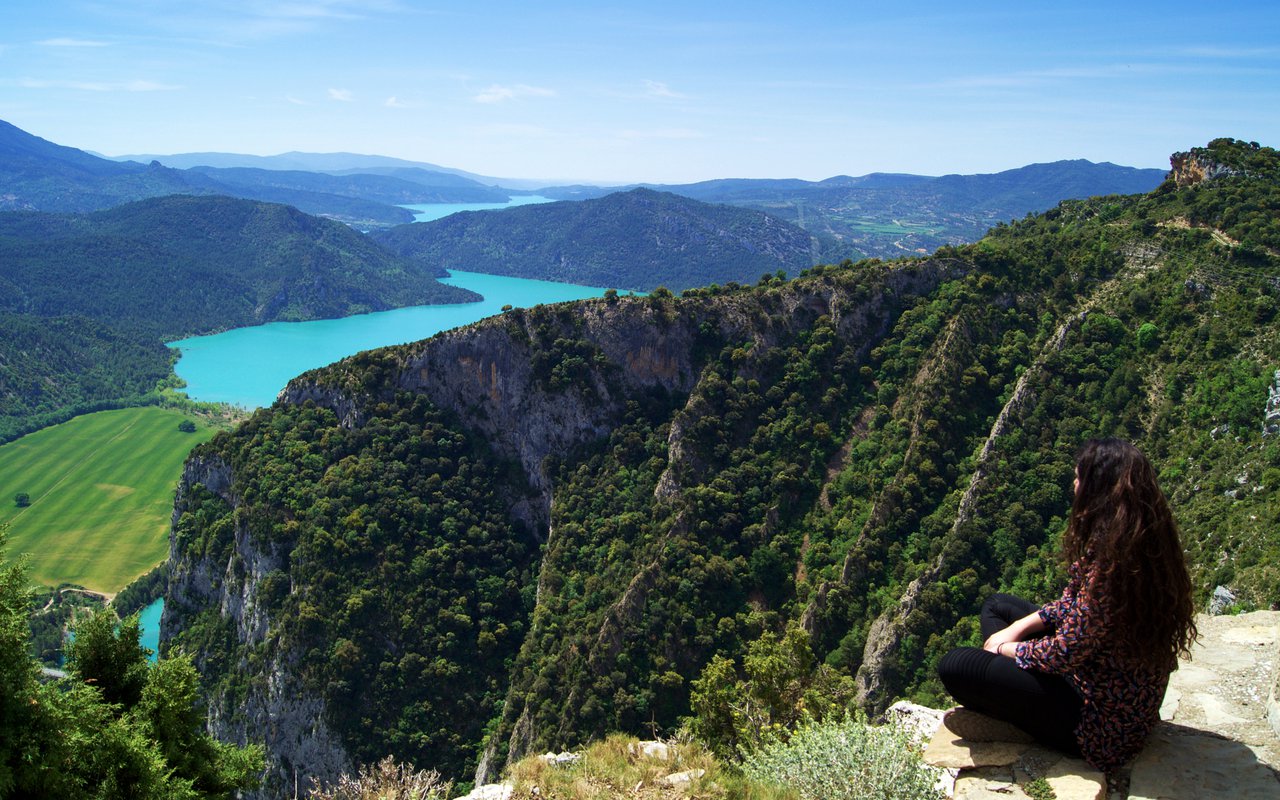 Once named the most "Portuguese city in Portugal."  the Monsanto Village (Alcains, Portugal) Houses are tucked between, on, and under giant rocks.

At the top of the 400 feet high hill and defined with the cooperation of its landscape, Monsanto hangs up on the mountain top overlooking the Portuguese countryside with miles of views.

Monsanto tiny streets are winding against covered boulders at a steep grade of previous red-roofed cottages. Some of the rocks are actually door-shaped, resulting in properly carved structures in the rocky landscape. While the mountain city appears somewhat unorthodox, it is truly a special twist on traditional Portuguese architecture. Walking along the paved streets, it quickly becomes apparent that Monsanto is Portugal's microcosm. In a number of buildings and a church, the architecture even incorporates the Portuguese Manueline style. While it sincerely represents the classic Portuguese village style, the cottages built in boulder chic will undoubtedly impress site visitors more than the medieval Romanesque or Manueline cottages. 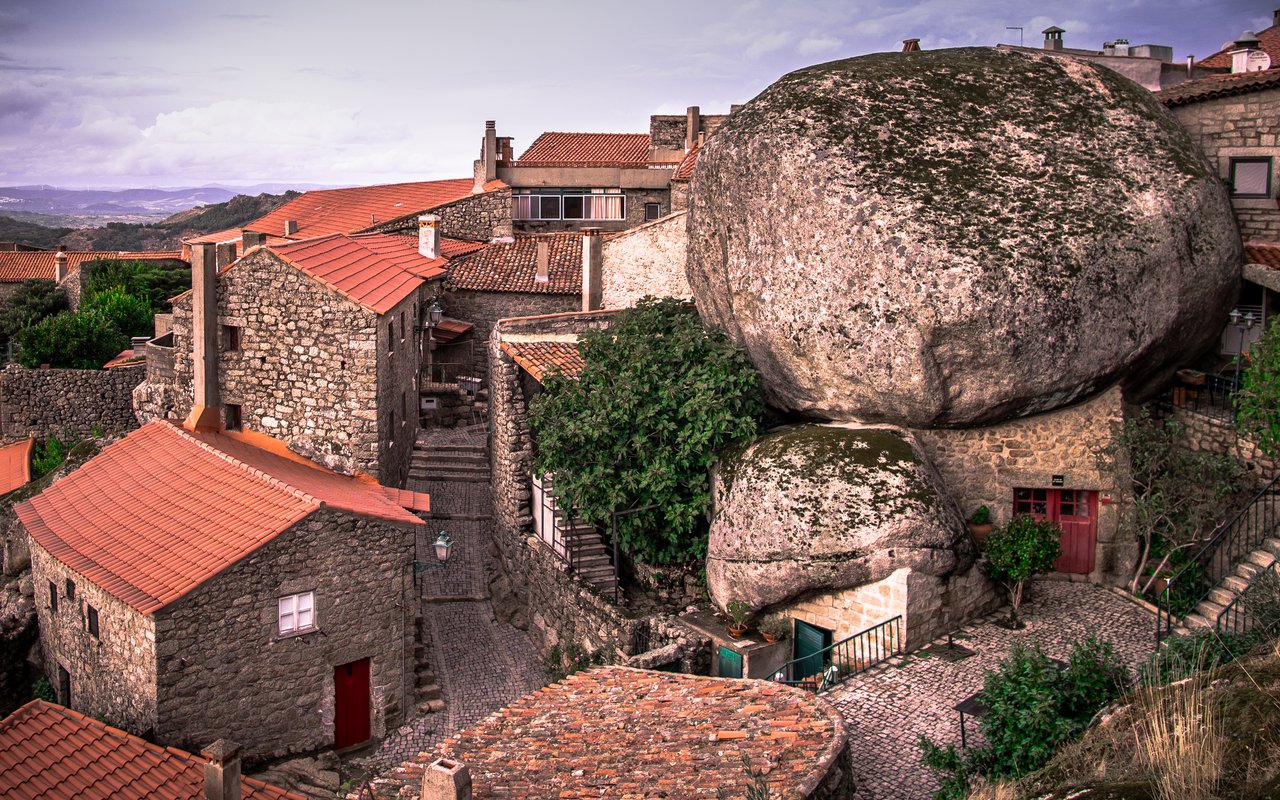