Journey to Alentejo: The Land of Inspiration

Portugal The Land of Inspiration

This time, we crossed the Alentejan meadows and vineyards all the way south to the azure waters of the Algarve. Once in the southernmost point of mainland Europe, Cape St.Vincent, we headed up to Lisbon along the breathtaking Vicentine Coast.

Traveling by hitchhiking in Alentejo with my 20-year-old Ukrainian friend Max was challenging but amazing. As he would say, “it was an unforgettable experience!”.

We started our impromptu backpacking adventure in my city, Plasencia, located in the timeless Western Spanish province of Cáceres.This summer has been one of the hottest around here, with the thermometer reaching 45ºC on some days at noon, like that day in Valencia de Alcántara, our first stop, where we had to stick our thumbs up for half an hour under the blistering sun when we found out that there was no connection by public transportation to the Portuguese fortified town of Marvão, only 25km away. 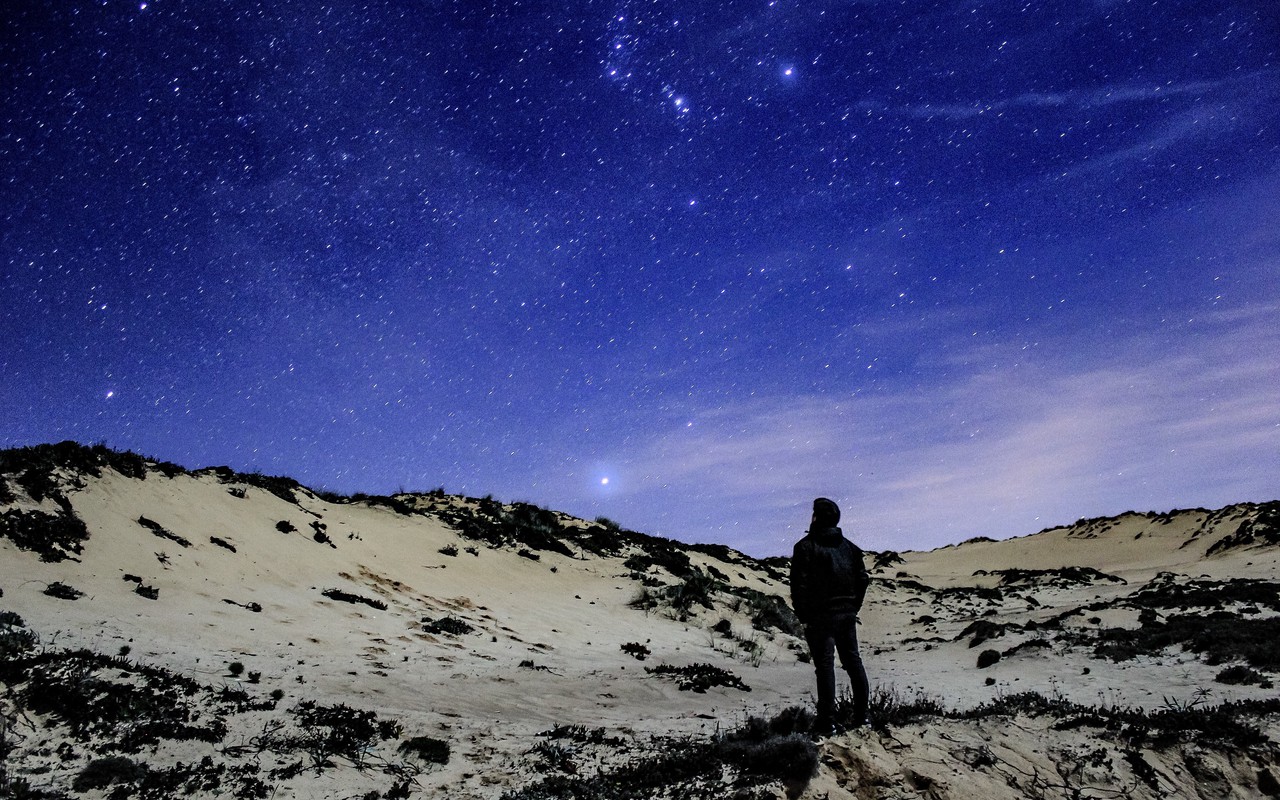 From Alentejo to Algarve

We were dropped off at the so-called border by two friendly Spanish ladies and crossed it by foot. If it wasn’t for the blue sign with the word “Portugal” encircled by twelve stars, I wouldn’t have even noticed that we were no longer in Spain. But I somehow realized anyway; the atmosphere changed drastically in this neighboring country: the passage of time slows down and the pace of life is more relaxed. I was told that many northern Europeans are moving to Portugal in pursuit of a calm and bucolic retirement; a seemingly tragic yet beautiful way to enter the last stages of one’s life: through reconnecting with nature and spirituality. 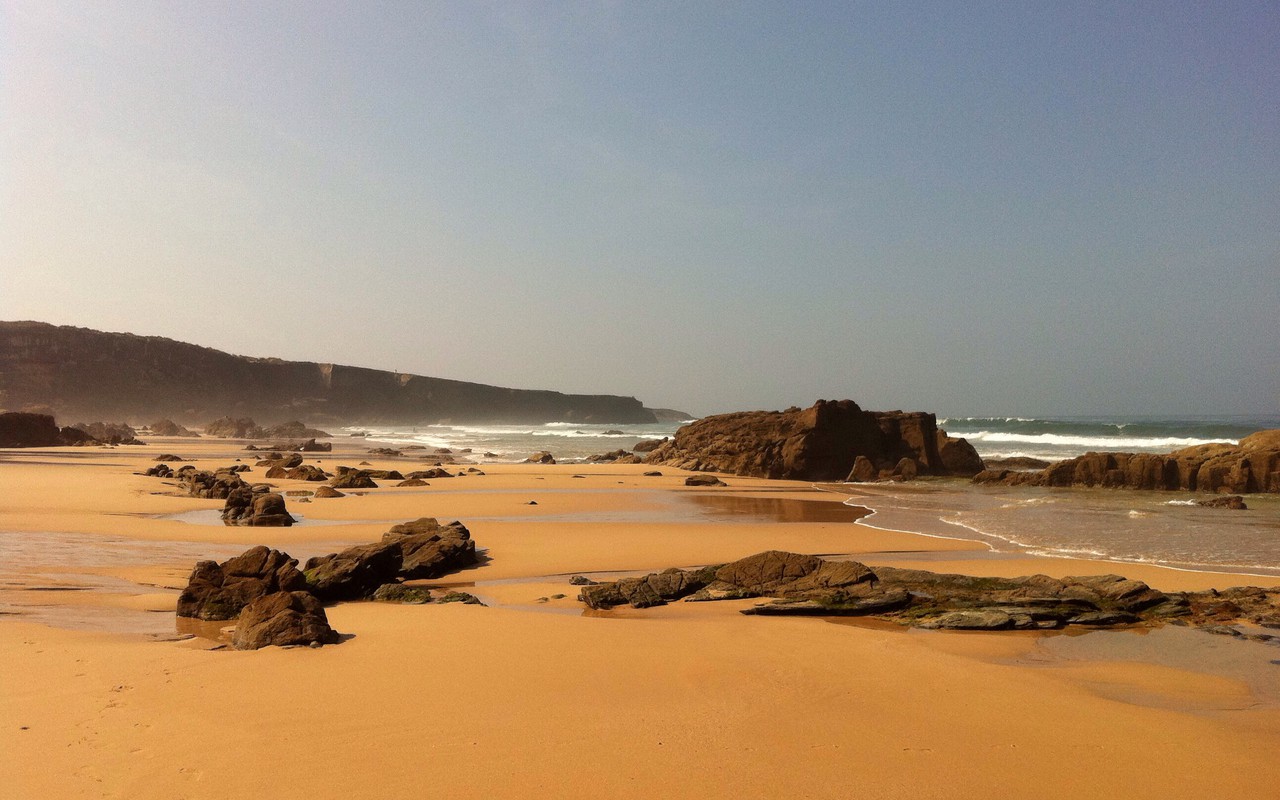 Ten days later and 250km further south, we met Shanti, a 56-year-old Finnish Amazon who shares these aspirations with Paul. She bought a large land area from a Belgian family near Almodôvar and she enjoys life’s simple pleasures, be it meditating, cooking, walking her dogs or riding her horses. She’s also committed to permaculture, making cheese from the goats she brought from her hometown across Europe and buying regional products to support the local economy.

Two of our hosts in Alentejo acknowledged this a long time ago. Paul, a retired German psychologist, lives in an old shepherd’s house in the Natural Park Serra de São Mamede. He explained to us that he tries to achieve self-sufficiency by reforming his home with sustainable technology and growing his own vegetables. He has a great wanderer soul and we spent most of the time sharing travel stories under his fig trees and discussing nature and spirituality.

We stayed for a few days with Paul and Shanti during our one-month journey and we had the opportunity to discover the hidden beauty of the Portuguese countryside through their eyes and enjoy the pleasant daily life in these two isolated places wherein, paradoxically, they were closer to all that they needed. As much as I did. 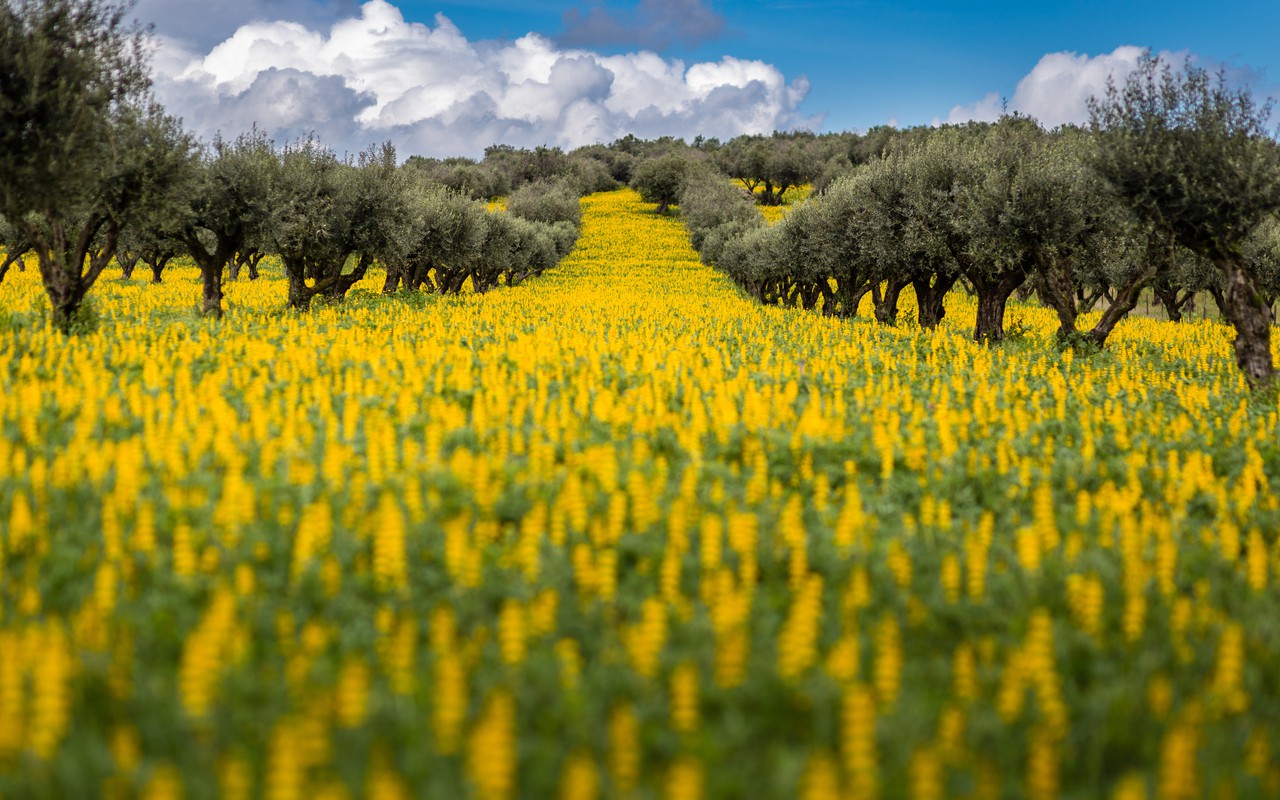 One of the most exciting things about this trip was the spontaneity of our itinerary, based on recommendations from the people we met on the road. After we left Paul’s mountain refuge, we wandered on the narrow and slippery paved streets of Portalegre, a very small but beautiful city at the foot of St. Mames Range.

Max went up to the Sanctuary of Nossa Senhora da Penha, the place where, according to popular legend, two men remain petrified until they confessed to having murdered an elderly parishioner who used to go up every day to pray at the chapel. Meanwhile, I had been

having a very interesting conversation with a 55-year-old Portuguese man who dedicated all his life to breeding racing pigeons, a tradition passed down from generation to generation in his family.

We walked back downtown and had some beers in the shade of the 182-year-old Maple Tree of Rossio, which itself had witnessed so many significant events; stories that I’d like to listen to or read on rainy days. There we met Daniel, in the park he used to play at, as a child. Today, he’s a 32-year-old local policeman, passionate about traveling and music festivals. 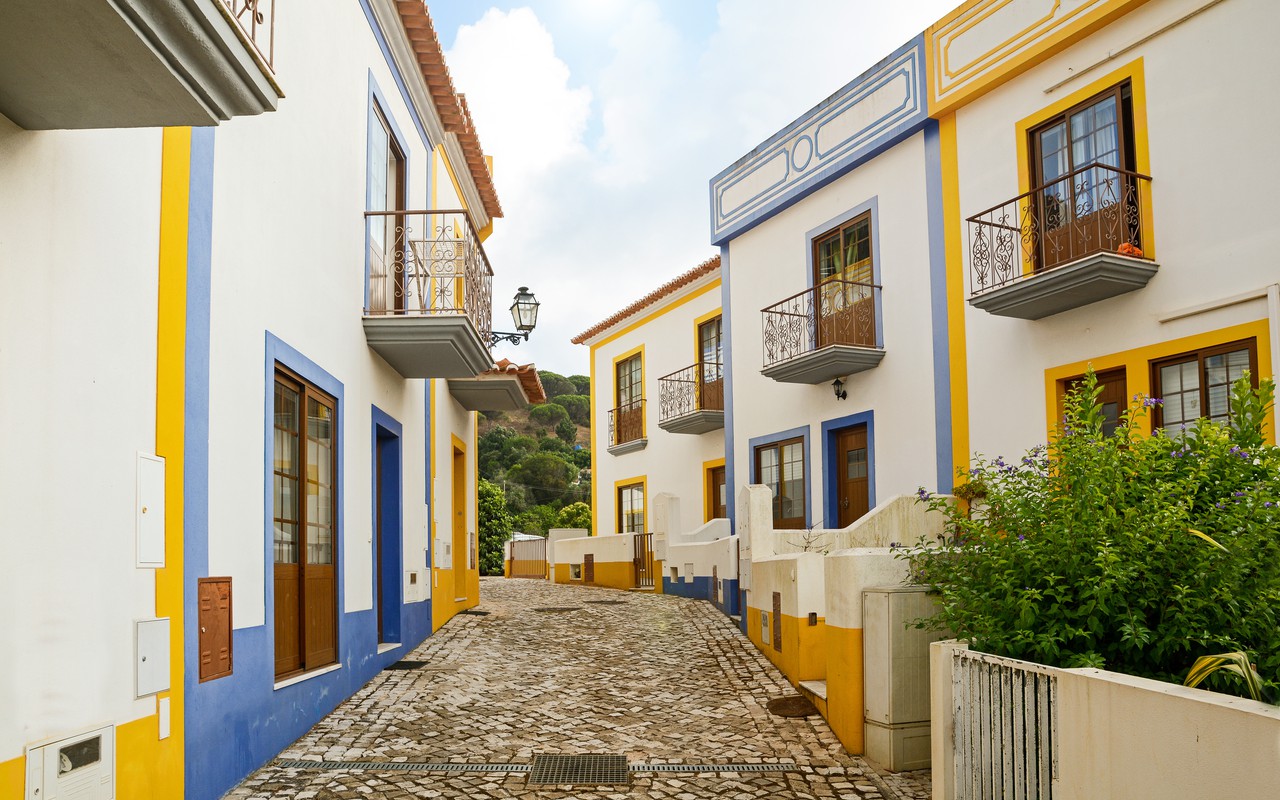 He showed us his favorite spots in Portalegre and gave us advice about the highlights of the region.“Imagine whitewashed small houses with tiled roofs, on a hill crowned by a medieval castle and surrounded by large vineyards and olive grove fields at the golden hour. This is how Estremoz looks like, you should go there!” he exclaimed with unusual vehemence right before leaving. We decided to visit that picturesque town on our way back to Spain and head straight to the UNESCO World Heritage city of Évora the next day, mainly because I couldn’t wait any longer to fulfill the promise I made to myself of returning to those places where once I was happy. Max was not only very interested in the mixture of architectural styles but also very curious about the unique (and creepy) Chapel of Bones. 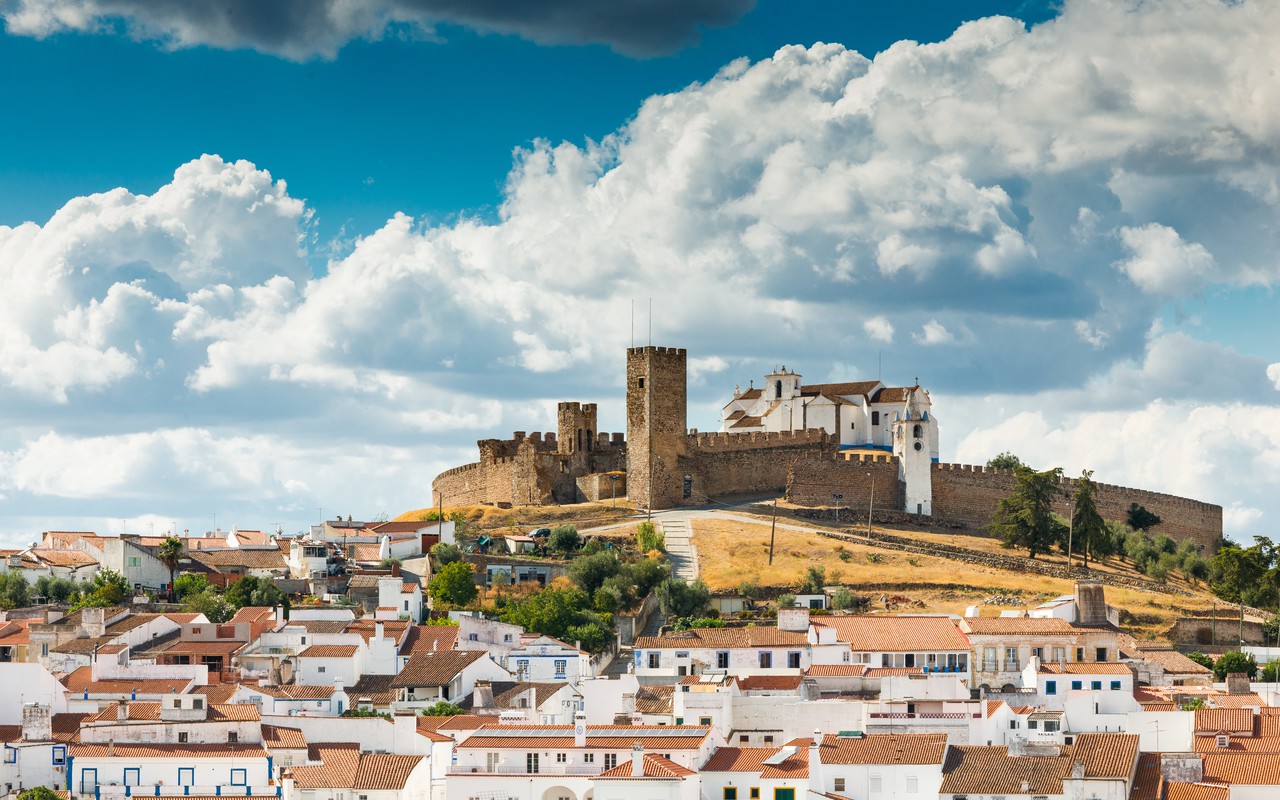 As you may know, destiny is unpredictable and apparently hates making plans even more than I do, so after two fun rides —first with a kind old winemaker, then with a cheerful 25-year-old soldier—, we ended up in Estremoz just in time for the sunset, which indeed, was wonderful! I could continue to describe all the Alentejan hidden gems we discovered on our route but at this point, you’ve probably realized the reason why this region is so inspiring: it was the people and the precious and meaningful connections they have with their land. 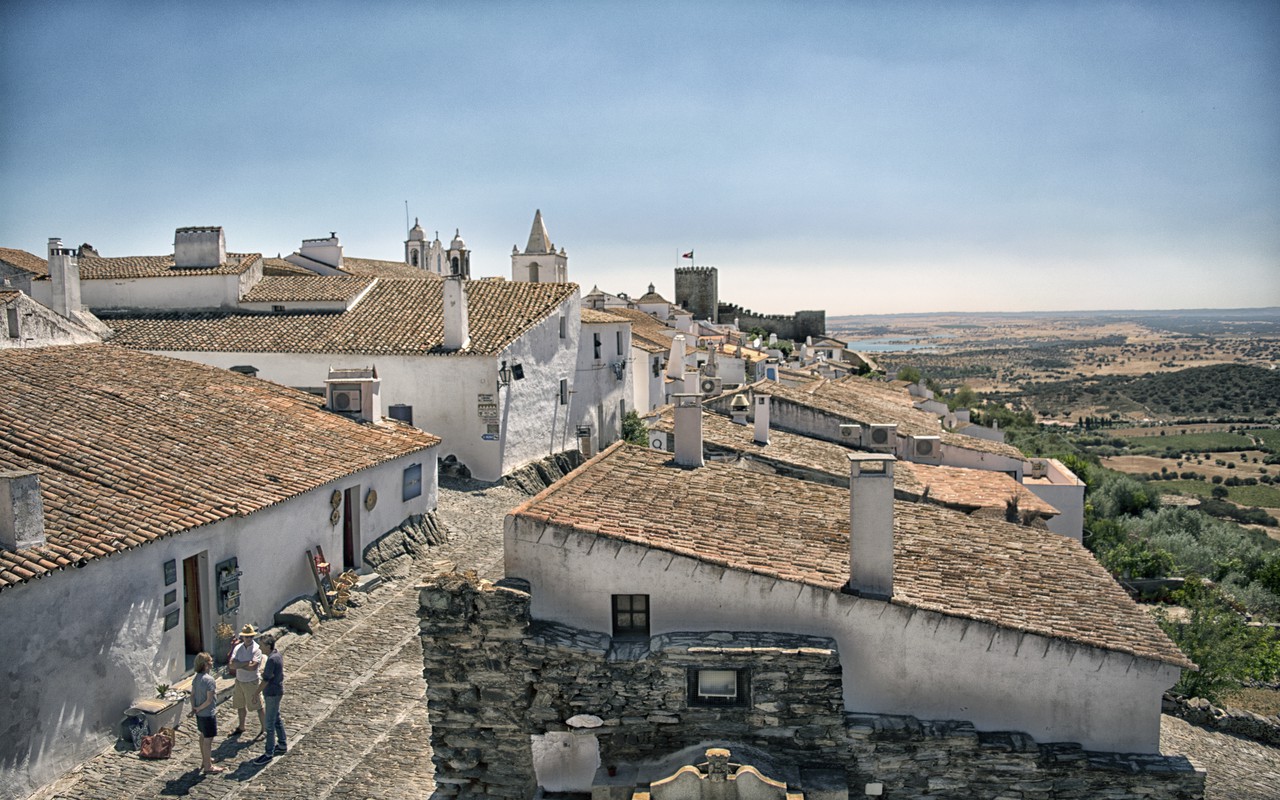 Somewhere in the middle of nowhere, our paths crossed with João’s, a 30-year-old green-eyed, olive-skinned engineer from Moura with whom I connected the moment he stopped the car and invited us to join him on the way to his hometown. We talked non-stop about our lives like childhood friends who hadn’t seen each other for years. I remember laughing about an anecdote when suddenly he said, “I want to share with you a very special place for me”. He took us to the Alqueva dam, a peaceful shelter where he goes to clear his mind while drinking a beer and enjoying the sunset. We toasted for “chance encounters” and remained silent while gazing at the surreal orange sky until we finished our drinks. And there, contemplating as the sun faded away over the calm indigo waters, I realized that inspiration and beauty was to be found in simplicity, and it was in those ethereal moments when we remain blissfully unaware of anything, that we subconsciously smile.

My senses and sensations tend to intensify and sharpen when I travel to Portugal. Now I understand why.